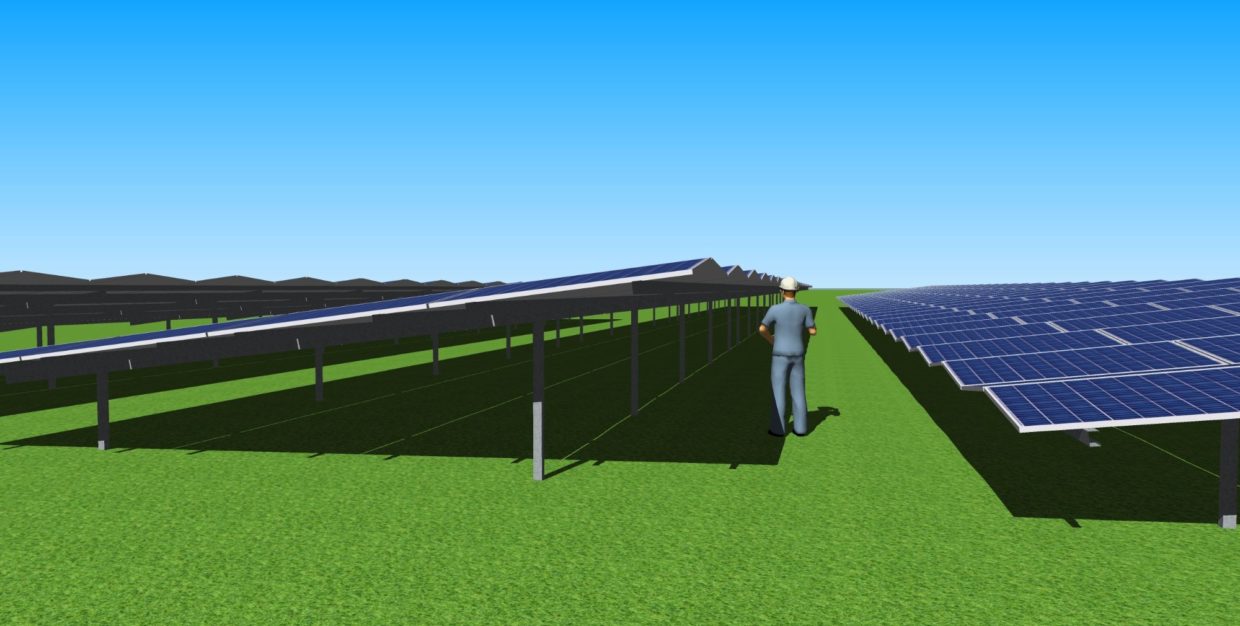 In SEW systems the panels are oriented south-east and south-west.

In my previous articles I’ve shown several variations of the X-panel solar technology. These arrangements all help the solar panels to stay clean due to better evacuation of (dirty) water. All these systems have in common that the panels are rotated while staying in the same plane, so after the rotation the module arrangement is still flat. In this article I’ll discuss a system that goes a step further: The SEW, the south-east-west arrangement (see pictures).

You’re always welcome to discuss the system. Please feel free to like or share this posting. Please note: We do not manufacture solar products, e.g. solar racking systems. What we do is offering direct licenses to solar project developers on a one-time pay-per-project basis. Typical soiling due to a backwater effect.

Most of today’s solar panels are embedded in aluminum frames. At low slope angles the lower frame rail of the panel builds a horizontal raised rib at the lower edge of the module. This rib causes a back-water effect. The filthy water is not correctly run off resulting in the accumulation of dirt on the glass alongside the lower frame rail (see picture). This often results in significant loss in yield. Leading solar project developers like ENERPARC and Baywa re declare that as far as the module angle, 20° is the “magic number”. They don’t go flatter to avoid soiling losses. Flow path of the rainwater in SEW systems.

SEW (south-east-west): The SEW-panel overcomes this problem in a new, simple and yet extremely effective way: Instead of rotating the panels in their own plane, the solar modules are arranged in a zig-zag-like way, much like an east-west system, but at the same time inclined towards the equator.
It looks much like a south-facing arrangement, but the effective orientation of the solar panels is (exactly) south-east and south-west. In this arrangement the horizontal corrugation disappears. The lower frame rails now both show (the same) slopes ensuring proper runoff of rainwater (see pictures). Thus the panel will remain clean, even at slope angles of only a couple of degrees. In fact it’s the very same self-cleaning effect that the X-panel-variations have in common, although made possible in a different way.

To sum up, the main benefits of “SEW south east west” are:

About the SEW technology: Please note that I publish my ideas only after having filed for corresponding patents. The patent for this technology is pending in the European Union, in the US, in Japan and in China. So please check with me and/or with public patent registers before using this ideas for commercial purposes.