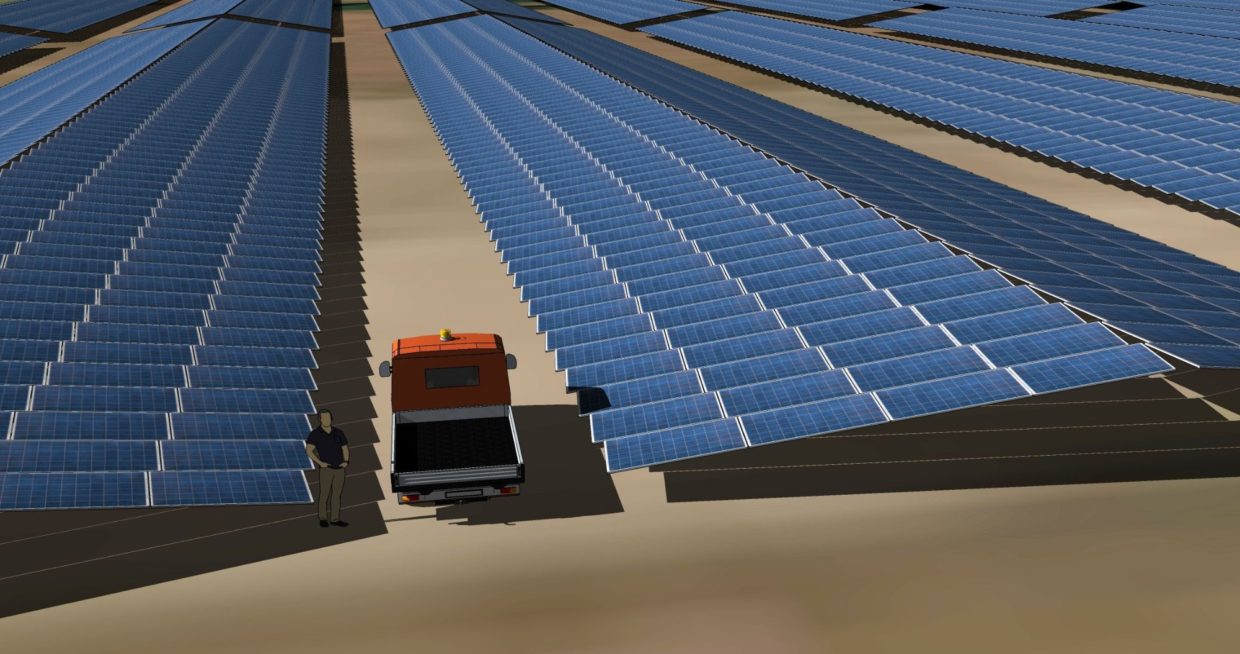 Solar plants are changing. From one-size-fits-all towards well-adapted systems that give better technical answers to the most common cost problems. With these posts I’d like to contribute with new technologies that I’ve developed over the last couple of years.

In my last posts I’ve showed several variations of the X-panel technology solar where the solar panels were installed either in a „close to portrait“, in a „close to landscape“ or in a “middle position” orientation. These arrangements all help the solar panels to stay clean due to better evacuation of (dirty) water. This time I’ll show a solar plant design that we are working on for a client in the Netherlands. Due to the “SDE+ grant scheme”a big part of the new solar parks in the Netherlands is being built in east-west orientation, with typical slope angles of 10 degrees. Therefore I call this X east-west solar plant design respectfully “The Dutchman”.

Soiling due to bad evacuation of the rainwater.

Most of today’s solar panels are embedded in aluminum frames. At low slope angles the lower frame rail of the panel builds a horizontal raised rib at the lower edge of the module. This rib causes a back-water effect. The filthy water is not correctly run off resulting in the accumulation of dirt on the glass alongside the lower frame rail. This often results in significant loss in yield. This is even more true for those east-west systems where the panlel slope is often at 10 degrees

Like all other patent pending X-panel arrangements, “The Dutchman” overcomes this problem in a simple, yet extremely effective way: By slightly rotating the panel on its own plane, the horizontal corrugation disappears. The lower frame rails now shows a slope ensuring proper runoff of rainwater. The only thing that is left after a rainfall is a triangular spot that is, however, in the very corner and far away from the lowest cell. This ensures stable energy yields.

Another nice aspect of the “Dutchman”-design lies in it’s aerodynamical properties. Given by the unique geometry there are some kind of “V-shaped” slots that are formed at the ridge of the adjacent module tables. These (adjustable) slots might help a lot to compensate for air pressure difference between above and below the panels during strong gusts of wind. Same wind, less charge.

This compensation might be even enhanced with a variation where the panel lines are “shifted” against each other a couple of centimeters. The gaps that result from the shift open up the structure to be more able “to breathe”. This might cool the solar panels as well since the circulation of air is enhanced.

To sum up, the main benefits of “The Dutchman” are: